The national emblem is contained in a circle and is composed of a double diamond-thunderbolt or Vajra placed just above a lotus, surmounted by a jewel and framed by two dragons. The thunderbolt symbolizes the harmony existing between secular and religious power, which results from the Buddhist religion in its Vajrayana form. The lotus represents purity; while the jewel stands for sovereign power; and the two dragons, male and female, truly depict the name of the country, declaring it in their great voices to be the Land of Thunder Dragons. 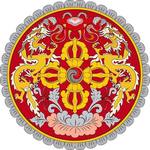 The upper yellow half of the flag signifies the secular authority of the King. It is the color of fruitful action in the affairs of both religion and state. The orange half of the flag personifies religious practice: the spiritual power of the Buddhist doctrines manifest in the Kargyupa and Nyingmapa sects. The dragon symbolizes the name of the Kingdom (Druk), and its color the white of purity, is indicative of the loyalty of the country’s many racial and linguistic group. The snarling mouth expresses the stern strength of the male and female deities protecting Bhutan, while the jewels clasped in its claws symbolize the wealth and perfection of the country. 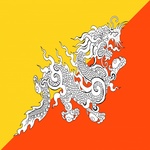 Blue poppy or Meconopsis grandis, which grows in the high altitudes of the alpine meadows of Himalayas, is the national flower of Bhutan. Despite its pretty and delicate appearance the blue poppy has the power to endure harsh weather, especially winter, and blooms to its full beauty in spring. 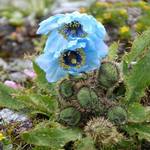 Cypress or Cupressus torulosa is the National Tree of Bhutan. Locally, it is known as ‘Tsenden’. It is also referred to as the Bhutan Cypress or Himalayan Cypress. The Bhutanese consider the cypress tree sacred and hold it in great reverence. Its ability to survive in difficult, rugged and harsh terrains and its strong and straight form are believed to be akin to the elements of simplicity, hardiness and bravery in the people of Bhutan. Cypresses are often planted outside monasteries, dzongs and religious places, and its wood and branches have been used as incense for thousands of years. The cypress is an evergreen tree that can grow up to 45 m in height and its trunk can have a diameter of 90 cm. It is often found at 1800-3000m in the Himalayas, where it thrives in tropical and subtropical rain forests, preferably with calcareous substrates and plenty of sunlight. 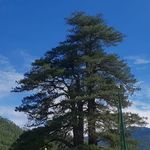 The national bird is the Raven. It ornaments the royal crown. The raven represents the deity Gonpo Jarodongchen (raven headed Mahakala), one of the chief guardian deities of Bhutan. 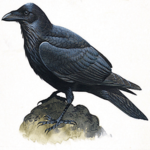 The national animal is the Takin (burdorcas taxicolor) which is associated with religious history and mythology. It is a very rare mammal with a thick neck and short muscular legs. It lives in groups and is found in places above 4,000 meters high in the north-western and far north eastern parts of the country. It feeds on bamboos. An adult takin can weigh over 200 kgs. 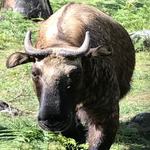 Men wear a heavy knee-length robe tied with a belt, called a gho, folded in such a way to form a pocket in front of the stomach. Women wear colorful blouses over which they fold and clasp a large rectangular cloth called a kira, thereby creating an ankle-length dress. This forms a large pouch above that may be used to contain particular items, traditionally a bowl and betel nut. It was introduced during the 17th century by Shabdrung Ngawang Namgyel to give the Bhutanese a unique identity. A short silk jacket, or tego may be worn over the kira. Everyday gho and kira are cotton or wool, according to the season, patterned in simple checks and stripes in earth tones. For special occasions and festivals, colorfully patterned silk kira and, more rarely, gho may be worn. All Bhutanese citizens are required to observe the national dress code, known as Driglam Namzha, at all official public gatherings. 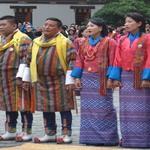