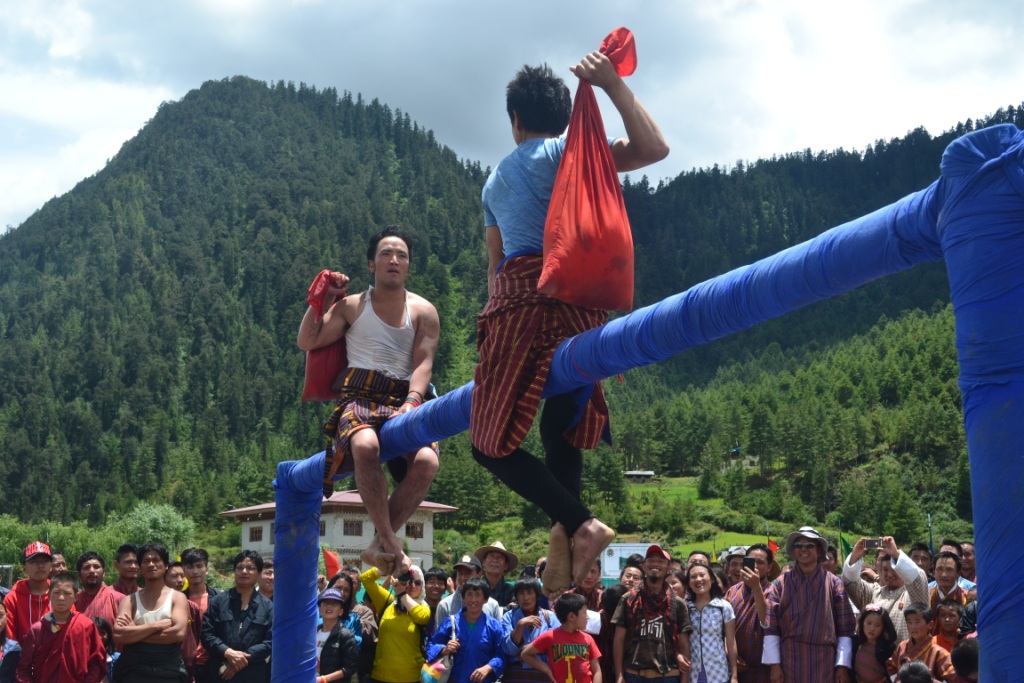 Flying into Bhutan offers the most spectacular views of the Himalayan ranges, including Mt. Everest (8,848m/29,028ft), Mt. Kanchenjunga (8,586m/28,169ft) and Mt. Gangkar Puensum (7,564m/24,836ft). On arrival we meet you at Paro International Airport after clearing your immigration and customs formalities. Today we travel to Thimphu (54-km) for an hour, the capital of Bhutan and transfer to your hotel for check-in. Stop off at the 13th century Tachog Lhakhang (temple) en route, built by Saint Dupthop Thangtong Gyalpo (the iron bridge builder). Continue travelling via Chhuzom (24-km) where the Pachhu and Wangchhu Rivers join. Chhuzom (confluence) is a major road junction connecting Thimphu (30-km) to the northeast, Haa (82-km) to the southwest and Phuentsholing (141-km) to the south. Afterwards, explore the Centenary Farmers Market (Thimphu’s weekend market), a platform for Bhutanese farmers to sell farm produces, local arts and crafts, etc. Enjoy a welcome drink and dinner with authentic traditional Bhutanese meals in the evening. Overnight in Thimphu.

Today we explore the best attractions of Thimphu city at 2,300m, home to approximately 138,736 inhabitants. Thimphu is a small city but has many attractive places. Morning begins with a visit to the National Memorial Chorten (Stupa), built in 1974 in honour of the Third King Jigme Dorji Wangchuk (1928-1972). This stupa is a prominent monument for Bhutanese daily worship in the city with its golden spires and bells. Another must see place to tick off on your list is Kuenselphodrang (the largest 169ft Buddha Dordenma statue in the world), built in 2006 and sits atop a hill, overlooking the southern entrance to Thimphu city. Our next stop is at the Folk Heritage Museum nearby, located in Kawajangsa, in the heart of the capital city, Thimphu. It is more than 150 years old and showcases the Bhutanese rural life in the olden days through exhibits, demonstrations, educational programs and documentation. After lunch, continue onto the National Library of Bhutan nearby established in 1967, which is located in the cultural centre of Thimphu, the capital of Bhutan. Here you’ll see the world’s largest book “Bhutan: A Visual Odyssey Across the Last Himalayan Kingdom.” It weighs over 60 kg, is 1.52 metres high and 2.13 metres wide and its pages are turned once per month. We explore the Authentic Bhutanese Crafts Bazaar (also known as Thimphu Handicraft Market) built using the eco-friendly bamboo structures. It is a perfect place to get a glimpse of authentic Bhutan-made art and craft products sourced mostly from rural areas. This afternoon ends with a tour by visiting the Tashichhodzong, first constructed in 1216 AD and re-built in 1641 by Shabdrung Ngawang Namgyal (founder of Bhutan), which now houses some ministries, the office and throne room of His Majesty the King and the Central Monk Body. Overnight in Thimphu.

After breakfast, we travel (71-km) about 3 hours to Punakha, once the winter capital of Bhutan until 1955. It is situated in western Bhutan with a warm and temperate climate, bordered by Gasa to the north, Thimphu to the west and Wangdue Phodrang to the east and south, and also a popular tourist destination. Stop off at Druk Wangyal Chortens (108 Stupas) before crossing over Dochula Pass (3,050m). On a clear day, you can enjoy panoramic views of the snow-capped Himalayan peaks, including Bhutan’s highest mountain (Mt. Gangkar Puensum at 7,564m). Continue our scenic journey (52-km) to Punakha and Wangdue Phodrang Valley. Arriving in Punakha (1,350m), visit the fertility Chimi Lhakhang (temple) en route, nestled on a round hillock near a village called Sopsokha, built in 1499 by Saint Drukpa Kunley (known as the Divine Madman). The temple is about 10-km from Punakha Dzong and takes 20-minutes walk through agriculture fields. Legend has it that the childless couples wishing to have a baby from across Bhutan and occasionally from overseas are blessed with a child after visiting this mysterious temple. We also visit the Punakha Dzong, which is strategically located at the confluence of the Phochhu (male) and Mochhu (female) Rivers. Shabdrung Ngawang Namgyal (founder of Bhutan) built the dzong in 1637. Jacaranda trees beautifully cover the dzong with the purple bloom of flowers in the spring. Overnight in Punakha.

Discover the delights of Punakha–Wangdue Phodrang Valley. Punakha is situated in western Bhutan with a warm and temperate climate, bordered by Gasa to the north, Thimphu to the west and Wangdue Phodrang to the east and south, and also a popular tourist destination. You’ll at first drive (7-km) about 30-minutes to the parking by the Mochhu River before climbing up the majestic Khamsum Yulley Namgyal Chorten. The Queen Mother Ashi Tshering Yangdon Wangchuk built this 100ft tall temple in 1994, located on a strategic ridge overlooking terraced fields and countryside of Punakha Valley. From the parking, cross a suspension bridge over the Mochhu River and walk up through paddy fields to the base of the hill before climbing a moderately inclined trail surrounded by pine trees. It takes about 45-minutes to hike up to the top. In the afternoon, sightseeing includes the Punakha Dzong, strategically located at the confluence of the Phochhu (male) and Mochhu (female) Rivers. Shabdrung Ngawang Namgyal (founder of Bhutan) built the dzong in 1637. Jacaranda trees beautifully cover the dzong with the purple bloom of flowers in the spring. Your tour continues to the charming Rinchengang village opposite to the Wangduephodrang Dzong, which is about 20-minutes walk uphill from the highway, and the village is known for its skill in traditional method of stone masonry. Our final stop is at the Sangchen Dorji Lhuendrup Nunnery Buddhist College in Wolakha, spectacularly located on a hilltop (25-minutes drive from Punakha Dzong). The Queen Mothers’ parents built it in 2008 for nuns to pursue higher Buddhist studies. Overnight in Punakha.

Day 5
Back to Thimphu

After breakfast, our return journey takes us to Thimphu (134-km) about 5 hours drive, pausing en route at Dochula Pass (3,050m). Perhaps why not take a chance to meditate awhile in the 11 man-made hidden “Igloos – Caves” with 11 different paintings of gods and goddesses? People seeking inner peace from modern day stress come to Dochula Pass for meditation. Arriving in Thimphu, visit the Drupthob Thangtong Dewachen Nunnery, popularly known as Zilukha Anim Dratshang and is located on a gentle slope overlooking Thimphu Valley. The monastery was built in 1976 by the 16th emanation/reincarnation of Thangtong Gyalpo, Drubthob Rikey Jadrel. Here spend time with some 60 nuns or so that has devoted their life to Buddhism and also provide spiritual needs of the community. Continue to the Jungshi Handmade Paper Factory, a small industry, where you will see the entire process of producing the authentic Bhutanese handmade paper (known as Deh-sho) using the bark of two local tree species (Daphne and Dhekap). You can also even try your hand at this ancient craft and make your own paper for a special souvenir. A shop beside the factory sells the handmade paper, cards, calendars, envelopes and paper bags. Use your free time to relax or explore the streets of Thimphu city. Overnight in Thimphu.

Leave Thimphu city behind and make your way (112-km) about 4 hours to Haa (2,700m) via Chhuzom (30–km) where the Pachhu and Wangchhu Rivers join. Chhuzom (confluence) is a major road junction connecting Haa (82-km) to the southwest, Phuentsholing (141-km) to the south and Paro (24-km) to the southeast. It is one of the smallest and least populated districts after Gasa. A rugged and mountainous terrain, endowed with very rich flora and fauna, characterizes Haa, bordered by Tibet to the north. En route you’ll see the Dobji Dzong looming majestically on a hilltop. It was built in 1531, considered to be the first model Dzong in Bhutan by Ngawang Chogyal (brother of Lam Drukpa Kunley). In ancient times the dzong served as a central jail. Today it is used as a Buddhist monastery. Afternoon sightseeing includes the Lhakhang Karpo and the Lhakhang Nagpo. These two temples located just above Haa–Thimphu highway are among the 108 monasteries built in one day by the Tibetan King Songtsen Gampo in the 7th century. Lhakang Karpo means the “White Temple,” built at a site where Songtsen Gampo released a white pigeon. The sacred white temple was reconstructed in 2010 and consecrated in 2018, which houses the monastic body of Haa. Whereas the Lhakhang Nagpo means the “Black Temple.” Similarly, a site where the black temple stands is believed that a black pigeon flew. Enjoy some leisure time in Haa Valley in the evening. Overnight in Haa.

Today spend a full day watching the Haa Summer Festival. The festival showcases a lively traditional living culture, nomadic lifestyle, demonstration of Bhutanese cuisines, processing of local ara (drink), traditional sports, religious performance, dances, songs, artefacts, and natural alpine flowers – you will be given details of the programme list. The evening is yours to enjoy at leisure, so why not go for a walk and explore the festive Haa Valley? Overnight in Haa.

We exit Haa and set off for a scenic, meandering drive (62-km) about 2.5 hours to Paro (2,200m), home to the famous Taktshang Monastery (also known as Tiger’s Nest), National Museum, Drukair and Bhutan Airlines. Stop off at Chelela Pass (3,988m), which is the highest motorable pass in Bhutan and 26-km from Haa. Soak up the most spectacular views of Mt. Jomolhari (7,314m) and Jichu Drake (6,989m) from here. Then it’s all downhill (36-km) to Paro as we leave the mountain scenery, where you’ll see the Kila Gonpa Nunnery (also known as Chelela Gonpa) en route, straddled on the cliff-side facing Paro. There are about seven small temples and several huts, a serene home to around 100 Buddhist nuns. Later, we explore the Ta Dzong (ancient watch tower), located about 6-km from Paro town, which now houses the National Museum of Bhutan. Walk down to the Paro Dzong (also known as Rinpung Dzong), which is located across the Pachhu River (about 2-km from Paro International Airport). The dzong was built in 1644 by Shabdrung Ngawang Namgyal to safeguard Paro Valley against Tibetan invasions. The evening is at leisure to relax and enjoy, we have allowed some time for this and also to explore a small Paro town and its surroundings. Overnight in Paro.

Regular Season – Land Only (Prices in USD Per Person) 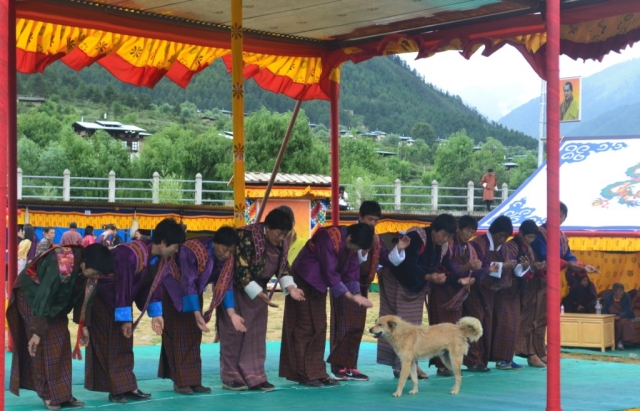 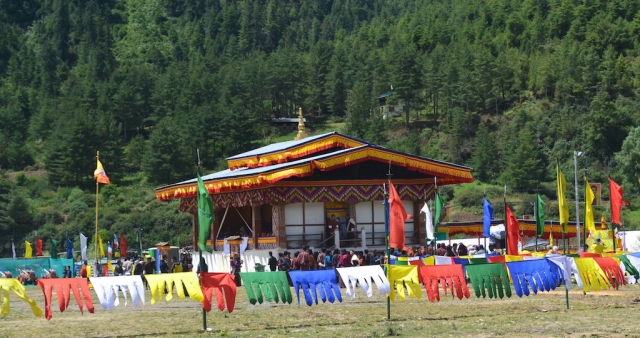 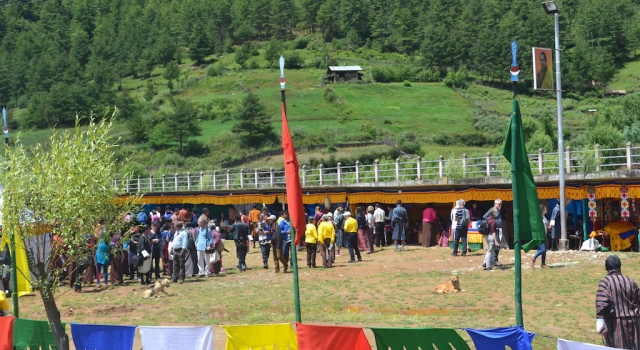 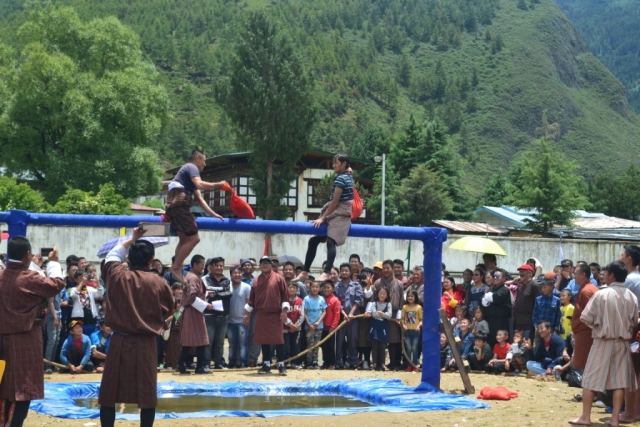 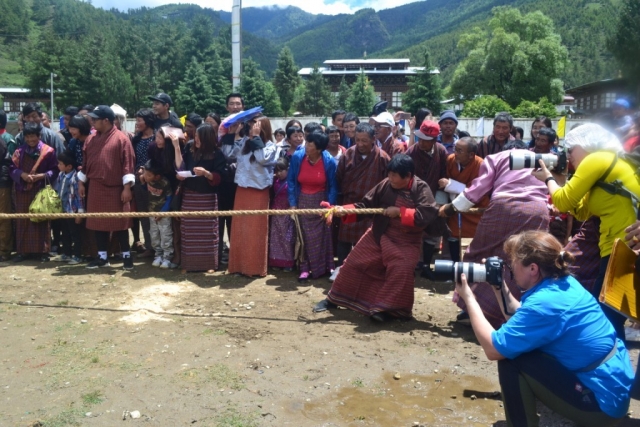 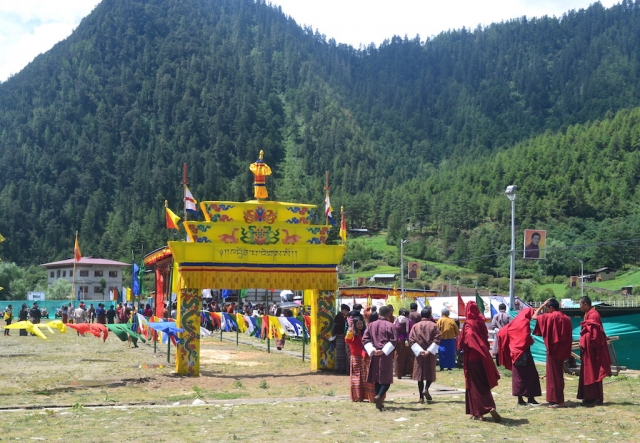